Broncos Run/Pass Ratio from 06 and Looking at 07 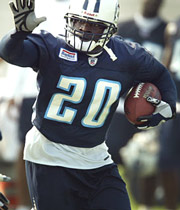 NFLGridironGab has posted the last season ratio run to pass for each team, as well as the teams outlook for 2007.  Here is a look at the Broncos from 06 and what to expect for 07.

2006: Denver was successful with the Bell(s) in the backfield last year. They ran the ball close to 31 times a game for around 2,200 yards total, with an average of 4.4 yards per carry. They replaced Plummer with Jay Cutler and did not miss rhythm making the change. The Broncos were better off running more times than the passing, as they missed out on the playoffs.

2007: With Travis Henry added at RB, expect Denver to reverse the ratio around this season. They need to use the play-action pass with a mobile Cutler and agile offensive line. Expect them to rank in the Top 10 running again and to mix it up going to the TE’s more over the middle.

Click here to read about the rest of the AFC

Broncos’ Work On A Lasting Legacy For Williams
The 2007 Broncos – new and improved?